A chair design-comfortable thanks to its chic style and its seat cozy. It invites conversation and relaxation.

Its structure in the grey metal, slightly smoked brings a touch of modernity and will integrate it into all types of interiors.

The desire of Dome deco is to create collections inspired by discoveries made throughout the world that result in unique combinations of colors and textures.

He then releases a warm, sophisticated and welcoming in the collections offered by Dôme deco designs of the furniture and the decoration suited to those who love the urban lifestyle and interiors with a touch of luxury.

No customer reviews for the moment.

Armchair with geometric forms asserted, the Milo is both stylish and comfortable thanks to its generous seat and back are friendly and welcoming.

The chair 3Angle is full of classic geometric shapes with unique design. Its arm-rests, folded, in the middle, took up the line of the human arm in a sitting position.

Enveloping and comfortable, the armchair 3Angle is a peaceful friendly place in which to relax. 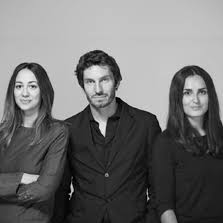 The originality of the armchair Strain comes from its structure made of steel tubes that intertwine to give an effect of lightness and a special dynamic to the design of this chair. He has been awarded in 2015 for its design, including the Reddot design award. Despite the visual lightness, the chair Strain provides the comfort of a sofa. The seat provides perfect support thanks to its elastic bands and the lumbar spine are well maintained by the cushion.

Choice in the color of the structure and the fabric of the seat. The folder is always in black or brown leather, your choice. We find on this model the base of the armchair RM58, which has led to its success, but with a base in four branches, which allows the chair to rotate on itself and to give it a very contemporary. The seat has also been expanded to 3cm compared to the original version.

For the anecdote, a photo of the chair arrives in the hands of Le Corbusier in 1961, he wishes to obtain the license, but the Polish authorities of the time block the sale. Probably because the seat also tells the story of the Polish socialist who does not allow the manufacture of chairs in fiberglass, a material that is reserved for military use at the time.

CUSTOMIZE YOUR ARMCHAIR BELOW

The chair The Reader has been designed for relaxation, be in a bubble of comfort and serenity. With its unusual form and its organic curves inspired design handcrafted Danish, the chair, The Reader helps to reduce the surrounding noise to better relax and concentrate. As the wanted sound designer Tor Hadsund, the seat is spacious for the wheelchair as well as the ideal angle of the folder, you will ensure maximum comfort.

Designed in Denmark by Tor Hadsund The chair RM57 was created in 1957 by designer Polish Roman Modzelewski who wanted to express themselves on the RM57 his passion for abstract forms while emphasizing diagonal lines, pure lines and simple geometric.

The chair RM57 also provides a comfort surprising thanks to the work done on the foam seat. Inspired by nature and the flower buds, the range of chairs trifidae has a design without concession. The chair Trifidae puts its occupant in a cocoon design and comfortable thanks to its seat slightly tilted and his arms enveloping.

Customize your chair Trifidae by choosing different colors on each part of the chair and get a unique seat (the fabric of each part must be part of the same range of tissue). The chair Finley Dome deco, with its footrest, will easily find its place in the interiors contemporary with its modern design and its size contained. Its broad and comfortable will allow you to install pleasantly and to spend long hours of relaxation. The designs formed by the seams provide an added touch of originality.